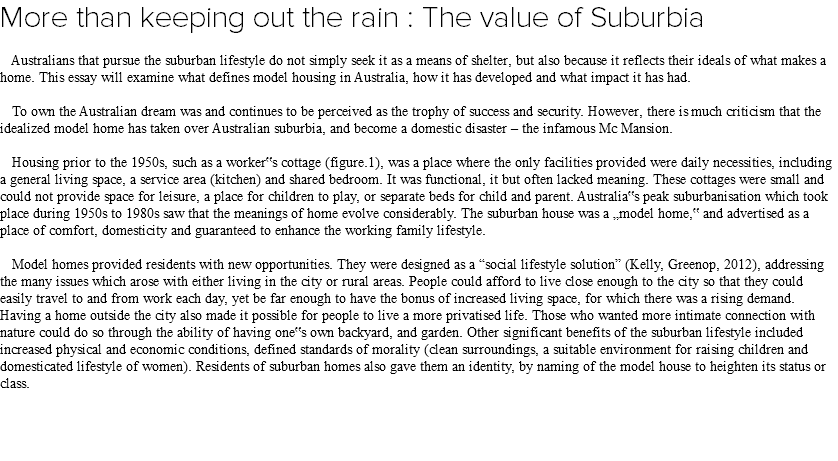 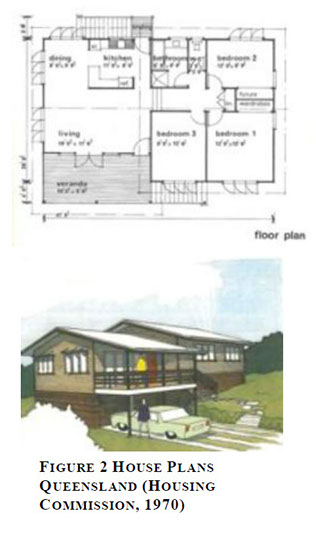 With suburbanisation, there was an increasing demand for space, to accommodate various new living spaces like a games room (a space just for children), a veranda (the outdoor entertainment area) and a master bedroom for parents (furthering the idea of privacy). This encouraged the expansion towards the modern idea of “A New Heart” (Dovey Kim, 1994) believed to invoke sense of freedom, privacy and provide an escape from tradition and the hustle and bustle of the city. Even though it was labelled and advertised as an „ideal‟ lifestyle, housing designs were modified to be more useable (both practically and socially) in day-to-day life. Formal (dining, living) spaces in the home was no longer the central part of the home, instead, informal (more relaxed, places of comfort) spaces (kitchen, family areas) became more centralized and therefore more elaborate and functional. The backyard is also incorporated into this informal space, often in the form of patio or veranda, which could be used as an entertainment area which was a less formal space than the indoor dining room, and had a connection with nature.

The model home was founded on the ideal lifestyle of a „domestic bliss‟ or nuclear family, where it would be led by women, who stayed at home to look after the children and whose primary role was within the kitchen. Women's role in the kitchen was so dominant a notion that even advertising rarely showed images of men in the domestic roles (figure 3). The model house in figure 2, as with many model homes were designed with supposedly the woman‟s needs in mind and orientated in such a way that the children‟s bedroom, dining room and play spaces were within view of the kitchen. According to Fiske, there is also an alternate side to the gender roles, where cooking is no longer defined as “exclusively „woman‟s work‟” (John Fiske, 1987), where advertising is gradually including men into domestic roles. The idea of having gender roles was to define the ideal family lifestyle, and advertising assisted in conventionalising it. There are still remnants of these broad generalisations like the heterosexual, nuclear family and the ideology that the domestic life is the women‟s role and domain, even today. 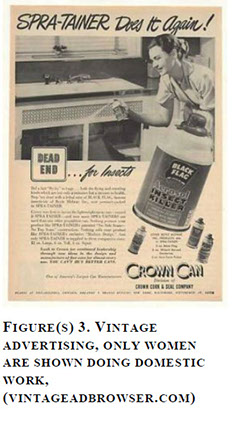 Australia's continually rising spatial appetite has been the root of the dramatic change in the attitudes towards model housing. Model housing schemes have thus grown to accommodate the demand, and have grown over the years to become enormous – the McMansion – and are the fast-food of the housing industry. In her book Dreams on Display: Suburban Ideology in the model Home (1994, p 146) Kim Dovey states that, “close attention to the discourse of model houses can easily lead to the reinforcement of the idea that suburban Australia is a cultural and architectural wasteland”.

Featurism, things that were added to make them beautiful rather than being an integral atheistic (figure 5), had dominated suburban architecture. Robin Boyd‟s The Australian Ugliness, condemns this type of housing, which “flinches from utility and camouflages everything in a layer of decorative kitsch that passes for beauty.” (Conrad, 2010) Many individuals, including journalist Peter Conrad are discontent with this atheistically unpleasant grid of endless and banal architecture (like in the background of figure 3). Conrad resonates with Boyd;

I knew exactly what he meant because I grew up in a Featurist house in the Hobart suburbs, a weatherboard carton to which my father applied a second skin of brick veneer. I even remember him inventively featurising the shelf above our fireplace. First, he varnished the pale wood to give it the colour of tea rankly stewed in a billy. Then, using a snagged comb that once kept his Brylcreemed hair in place, he made an undulating pattern in the wet varnish. The room now had a feature, a talking point; the effect was, as more sceptical or bewildered relatives said when they visited, “something different”. 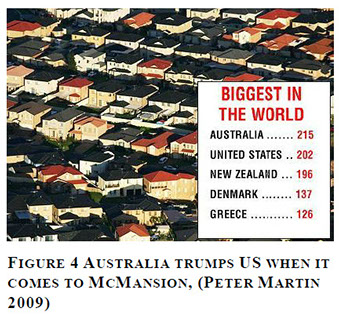 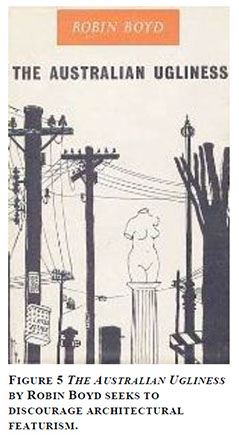 However, as Dr Naomi Stead clarifies in her article Reincarnated McMansion, these mansions are not in fact “crass, undiscerning, and lacking in taste”, but implies “class, status, luxury, prestige, (and) sensibility” (2008).

Suburban housing appears to have an effect on the social and psychological behaviour of residents, more specifically in regards to materialism. While stereotypes of suburbanites being unintelligent and small minded are false, there is concern that they are no longer prioritising the importance of looking after children (which was a popular ideal of „home‟ back in the 1950s) instead shifting their main concern towards materialism (1980s onwards) and doing well financially (Dovey, 1994, p138-40).

There is also a concern for the environment, as McMansions require a significant quantity of materials to build, furnish and maintain. As figure 4 outlines, the area in which an Australian suburban home requires nowadays is immense, averaging around 215 square metres, compared to the United States‟ 202 (Peter Martin, 2009).These homes can accommodate up to several bedrooms, kitchen, master bedroom, children‟s room, games rooms, lounge and theatre rooms, pool, computer rooms, workshops, verandas and single purpose rooms (toilet, laundry).

Possibly the most alarming argument posed by sceptics is that the suburban home can affect health. Leaving home is no longer necessary as all daily needs are provided for. Lifestyles centred entirely on luxury and comfort has created an obesogenic environment (Greenop, 2012) “Labor MLC Gayle Tierney said sprawling low density, car-oriented residential development on the urban fringe „can be a barrier to people making healthy lifestyle choices‟”(John Masanauskas, 2012). The low-density sprawl has restricted the space available for residence to exercise, and has been the origin of this belief that residents are unhealthy.

There are various other issues in regards to suburbanisation, including political (being a conservative only society), economic (resources required to build new infrastructure) and environmental (clearings to make space for new housing) stereotyping.

Despite the opposition to model homes, there are residents who still accept this lifestyle, and are in their eyes still the „Australian dream‟.

It's time to give McMansions their due, by Michael Duffy, praises McMansions for the sense of community which have been stimulated by social programs in these neighbourhoods. These connections also provide residents with security, in addition to often being gated. Residents‟ ideals still remain the same to those of the original model housing – they still want space with optimal physical and economic conditions, and a way of living which defines their standards of morality.

In conclusion, the idea and meaning underlying home is essentially the same, like the model home of the 1970s, but has expanded to include more comforts and convenience. The Australian Dream to present day is both criticised for being wasteful and distasteful, yet others disagree with their experiences being full of opportunity and freedom.

2. Arias, Ernesto (Ed.). The Meaning and use of housing: international perspectives, approaches and their applications. Aldershot, England. Avebury, 1993.

3. Boyd, Robin. Australia‟s Home: Why Australians built as they did. Harmondsworth, Middx.: Penguin, 1978.